As parents, there are many things we do for our kids. Even when miserable with the flu, I find myself standing in the kitchen cooking. The whole family, except for our youngest, has been hit by this latest flu — I don’t know which as another Mama at Kindi said there is now a new one just come down from northern Germany. What an unwanted visitor! Our two girls are on the mend, no longer with fever. But they are easily wiped out. Needing significantly more sleep than usual. My older daughter, seems to be perking up considerably. At the beginning of the week, she barely ate complaining that everything tasted funny and that she didn’t have an appetite.

This morning though, after suggesting the usual suspects for breakfast, she practically brow beated me for Korean food. That’s all she responded: “How about oatmeal, Vera?” “I want to have Korean food.” “I would like to have Korean food you mean? Hmm. That might be tough. I don’t have any rice made. How about some bread? You could have some Gelbwurst with that.” “Korean food,” she would say in a sing-song voice. “Cornflakes?” “I said Korean food,” more decisively.

Finally, after suggesting cornflakes a few more times, I saw some udon noodles and agreed to make those for her. I was too tired and sick to see the one lone pack of Shin Ramyun hanging off of a shelf, which I would have gladly made for her instead. (Of course she loves ramyun.) No, we didn’t have any handy packets of broth or seasoning for udon lying around, so I was boiling water and measuring tablespoons of soy sauce and mirin and throwing in dasima (kombu or kelp) and myulchi (dried anchovies) for her. Luckily, there were leftover steamed vegetables from last night’s dinner so I threw in some broccoli and peas too. Despite the noodles themselves being pretty void of nutritional value, they helped make my sick girl feel good without the help of MSG and she got some veggies in her too.

I think what really gave her the Korean food bug was when she found me in a desperate moment at 6:30 AM, having already been up, asleep and up again with my son from 5:15 onwards, surrendering my iPhone to him to watch Gangnam Style. Not the Psy video, though my kids have seen it, but the Jayesslee cover. After having to awkwardly explain that it was not very polite to see someone singing while on the toilet, I was relieved to find this rather wholesome and equally captivating for my six and under crowd version of the song.

I found this version through a friend who posts many of the Gangnam Style parodies that have gone around and agreed that with twin cuties and a hit song, you can’t go wrong. It’s still pleasantly catchy but also not overstimulating.

I don’t subscribe to many YouTube channels but the video following was Maangchi’s latest video for kimchi guk (kimchi soup). My kids LOVE cooking videos, mostly because of the times they have commandeered my iPod Touch and now iPhone and found Maangchi’s videos. All three of them were huddled around watching the video.

We all decided that we would make kimchi guk for lunch.

A few hours later, one heroic effort followed the other (are you playing your violin yet?), and Vera and I left the house while the others were sleeping to buy our one missing ingredient: tofu. Since the adults are not eating meat right now, we didn’t buy any pork which is in Maangchi’s recipe.

We decided to use the remaining udon broth for Stella and Lenny’s non-spice version. We washed and soaked our rice, drained our mak kimchi, and then Vera helped me peel and chop the remaining ingredients: tofu, onion and garlic.

Here’s lovely Vera experiencing the sting that can come with peeling onions.

We crushed the garlic with our garlic press, sliced the onions and tofu adding 5 cups of water and 2 tablespoons of gochujang (Korean chili paste). The first ingredient was of course the drained kimchi.

We also put some of the onion, tofu and garlic plus kimchi in the smaller udon broth pot and omitted the gochujang. In the main pot, I added one dried shiitake mushroom and a piece of dasima. I brought both pots to a boil.

I removed the dasima after ten minutes and allowed both pots to continue to boil shutting off the smaller one after a total of 20 minutes. Vera was eager asking every few minutes if the soup was ready.

She couldn’t wait to bite in… 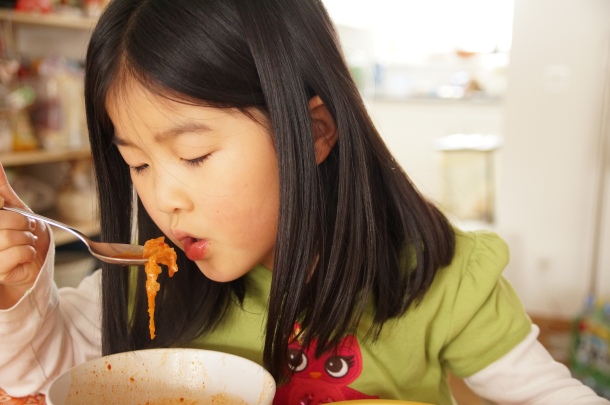 She really liked it!

My husband liked it too. It looked perfect, but I have to admit, it didn’t taste good to me. I think my taste buds are a bit off because I’m sick, but I suspected that the other pot for the smaller kids with the anchovy broth was tastier.

Later that day, I called my mother just as she was heading onto an 11-day Caribbean cruise. As I write this, the thought of her on that cruise still makes me cry – out of jealousy as we suffer with the flu in very snowy and wintery Germany and because I miss her so. I wanted to tell her to not worry too much about my family and me, that I was starting to feel better. I wanted to wish her and my dad, “bon voyage,” and I wanted to quickly ask her if she thought that kimchi guk could possible taste good without meat. Her short answer? “No.”

I’m going to continue to develop this recipe. It’s not all hearts and flowers over here in my part of blogland as other parenting and cooking blogs might lead you to believe. It’s a work in progress.